The following is a semi-professional attempt to summarize what happened in the world of digital media consumption in 2010 (focused on content), as well as an attempt to posit would the world could have in store for digital infophiles in 2011 and beyond. I am personally interested in digital media today and in the future, but I am not an expert and would very much welcome any feedback and/or push-back on this essay. Thank you in advance for reading and I look forward to your reactions.

In 2010, briefly, the iPad was introduced and thought to usher in a new era of media consumption. As it turned out, publishers have yet to figure out how to present their content to users in a consistent, uniform way. The first problem was user interface. Big media brands spent lots of money trying to develop an iPad experience that would hook in users, but the majority of them did not execute this correctly. The second problem was harder to attack: the fact that most readers will only consume a percentage of content from a source. In reality, those who read online cull their information from multiple sources which they aggregate in a variety of ways, such as RSS feeds, Google Reader, bookmarks, and of course, Twitter feeds. Finally, price. The New Yorker tried to unveil a very heavy, clunky iPad app which basically flopped, despite the fact that it’s widely considered one of the best magazines in the world. More recently, The Economist finally unveiled very nice iPad and iPhone applications, which they designed as freemium, giving full access only to current offline subscribers. Then, in the next month, they tested a Groupon deal for 51 issues for $51. If The Economist is doing this, the future is surely dark and stormy.

The argument I’d like to advance in this mini-essay is that from January 1, 2011, Twitter has completed the first phase of its pivot into solidifying itself as the back-end for digital media infrastructure, communication, and distribution. What started with Evan Williams’ return to product and Dick Costolo’s rise to CEO to Jason Goldman’s departure from product, and most recently, Flipboard’s Mike McCue’s appointment to the Board of Directors, has now placed Twitter in a position that is evidence of the strategic mastery and vision of Chairman Jack Dorsey. Up until mid-2010, Twitter grew so fast and became so important that it was perceived to be the front-end, where myriad types of consumers would consume information and media. All along the way, while investors clamored to get in on any financing round, a loud chorus of onlookers would always cry: “How will Twitter make money?” Truth be told, they haven’t figured it out yet. And, that’s OK.

There’s something so powerful yet simple about Twitter. Its infrastructure and ability to connect folks via mobile phone has already had significant effects on significant historical events. That much cannot be disputed. Yet for all its power, Twitter at the core is a geeky phenomenon. It’s an entirely different language with its own nomenclature of symbols, hashtags, and cadence. These idiosyncrasies endear the service to its loyal subscribers though simultaneously limit the chances it will grow into a full-fledged mainstream network the size of aslightly bigger network located 35 miles south of Twitter HQ.

The solution for Dorsey is the sum of the solutions to the two problems articulated above. One, publishers are hovering around the iPad, with its dizzying adoption rates, trying desperately to figure out how to deliver content and get paid for it, while giving Mr. Jobs a 30% toll. Two, Twitter has become so vital to the lifeline of these publishers for distribution that unless Twitter can increase its own user base and number of tweets, as well as helping users sift through to find content that appeals most to them, they run the risk of phasing out of favor or, worse, watching another reputation-based information network, such as Quora, sneak up on them.

The solution, then, is to help Twitter begin its transformation from a company that acted as the front-end of news and information into a company that will provide the back-end content, media, and horsepower for years to come. And, by focusing Twitter on its core strength, Dorsey paves the way for McCue and the Flipboard team to focus on their core strength — the front end. (I posed a question about this on Quora, click here for the thread.) Flipboard is already lightning hot, named as the app of the year, announcing an update so huge before Christmas in the same year, collecting a war chest of venture dollars, and essentially leaving its competition in Pulse and Flud, among others, in the dust.

I spent the last week using all three iPad apps (Flipboard, Pulse, and Flud). Here are my initial observations:

There’s something in between getting information provided by an individual, such as @atul, and getting information from a dedicated source, such as TechCrunch. In certain cases, users will want to follow topics and categories that pull information from various sources. This distinction, though slight, is critical to understand. It’s the type of distinction Quora gently employs, where a user can not only follow an individual on the network, but also topics and specific questions within those topics and/or related to people. That level of granularity actually mimics the nuance of our relationships much more closely than the asymmetry of following individuals and newsbots on Twitter.

The stage is set for 2011. Companies like Flipboard will be the front-end of what the mass market will see and consume. iPad sales are up and to the right. Consumers are yearning for ways in which to increase the signal while decreasing the noise in their lives. They want the best information from a variety of sources, and they want to share that content with their own networks in real-time. They want to know what their friends and thought leaders are reading. On the other end, writers, editors, and publishers need to make money by selling subscriptions or advertisements. However, with iPad proliferation and the beauty of using Flipboard, publishers and even bloggers may be able to syndicate specific content around specific topics, location, or context. It is here where the money lies, and here where the smart money will focus in 2011. This where Twitter, Dorsey, Kleiner’s recent investment, and McCue’s appointment come into focus. Twitter is now poised to be the de factor distribution channel for content, providing a robust back-end and the promise of new strategies to monetize consumption on mass market levels. This is the challenge for 2011 and beyond in mass market digital media. 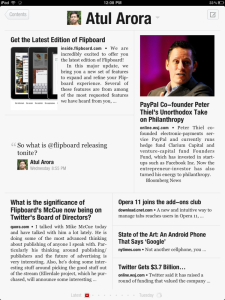