Here’s yesterday’s column on TC. People really seemed to like this, but the best part is the shout-out from Snoop Dogg/Lion himself on Twitter, which you can see here and below!

Shout out 2 @techcrunch n @semil for tha great write up! This is only the beginning. We just getting started. #Snoopify 2.0 comn soon!!

“What are the cool new apps you’ve seen lately?” To this oft heard question, lately, there have been lots of answers. So, mobile is indeed exciting and moving fast. And, just recently, a fun new app came out that instantly captured my attention — no, it’s not from a Stanford dropout or from the  ”innovation lab” of a large technology company. No. It’s from Snoop Dogg — excuse me — Snoop Lion. Yes, that’s right, the same artist so many of you grew up with. He’s diversified his musical career into the business of his own branded apparel, a television show, and now he invades the greatest consumer stage of our times — our mobile phones. And, what’s more impressive is just how he did it — the genius to observe and iterate, to pull out the nuggets of lessons we have learned and package it together with marketing that’s both fun, easy, and devilishly derivative yet simultaneously novel.

The app is called “Snoopify.” I think it’s both a noun (the app) and a verb (as in, to “Snoopify” a photo). Essentially, you can take a new or existing picture, and then open up a box of Snoop stickers (that’s right, stickers) and overlay them onto the picture before sharing it on every social platform . Most of the stickers, as you can imagine, have something to do with Snoop and his brand, which makes for a hilarious “Snoop filter” on these doctored photographs. The first time I downloaded the app, I  ”Snoopified” about five times in the span of 10 minutes and shared them everywhere. Snoop has essentially digitized himself and appified a scalable way to photobomb any picture with his signature brand. And, this is the best part — if you want to unlock the 2nd, 3rd, and 4th pages of stickers, pull out your credit card because they’re locked behind a paywall.

From a marketing and branding standpoint, this is all fascinating to me. Look at the intersections of trends here: (1) Photos remain the premium communication currency in our mobile world. Like SnapChat showed with their expiring images, there’s no end to the creative manipulation mobile software can offer to pictures. (2) Influencers with their own global, diverse audiences can leverage networks like Twitter and Instagram to breakthrough the noise and clutter of the iOS app storedistribution minefield. There’s the tactic  of growth hacking, yes — and then there’s the pure organic lift a celebrity can leverage to surpass everyone else. And (3) Stickers. Just a few months ago, everyone was hemming and hawing about Path’s latest 3.0 update which include new sets of free and paid stickers, perhaps influenced by the growth of mobile messaging apps in Asia (such as Line, an app which reportedly raked in US$50M+ in Q1 of 2013 by selling virtual goods in-app).

So, Snoop and his team watch all these trends converge, and steal a page out of the apps like Line and Path. Great artists steal, right? And, what do you know, it worked — I bought stickers, my first in-app purchase of a digital good. Brilliant.

I’ll be writing more about the overall trends I’m seeing at the app layer here in my column this summer, but an app like Snoopify, which rose quickly in the charts earlier this week, breaks convention with how much of the startup world views  how apps are supposed to be made and distributed. Distribution may, in the end, be just as, if not more, important than the actual app. Maybe. The creator of the app doesn’t actually have to do the hard-coding of the software — he or she can commission it, and it can be developed elsewhere. Of course, as I finalize this post, the app has already slipped in the charts. When I started drafting this post a few days ago, “Snoopify” was in the Top 25 trending free apps according to App Annie, but now as I finalize this early Sunday morning, it’s slipped to #36 (on AppData) and #58 (on App Annie) and is ranked #156 for grossing according to the official Apple App Store.

An app like Snoopify was destined to be faddish and not a business. Or, maybe this is just the first move by Snoop Lion to cut into the iPhone, on the app level. At scale, it’s an incredibly clever technique to extend his brand on top of other peoples’ pictures — the greatest photobomb at scale….ever! Perhaps he doesn’t see enough quality engagement on his work in popular music apps like Spotify or Rdio or other myriad music apps. Maybe he’s tired of Instagramming and receiving hearts in return, or maybe Twitter is just for distribution to his fan base. Maybe after stickers, he’s going to open private messaging inside his app, or broadcast scenes from his next concert to a select audience. (I’m having fun with this, naturally, though it’s not out of the realm of possibility.)

The opportunities on mobile are continuing to prove endless, and for someone as creative as Snoop, even a little mobile icon can represent the largest of sandboxes. Of course, not every artist can go to the lengths that Snoop went to in developing and promoting his mobile app, but of the ones who do have this luxury, Snoop’s foray into the  app store was a brilliant move, complete with a built-in revenue model, a platform for showcasing his brand, and artfully blending some of the biggest trends in consumer mobile behavior we have all collectively observed. Well played, Snoop — well played. 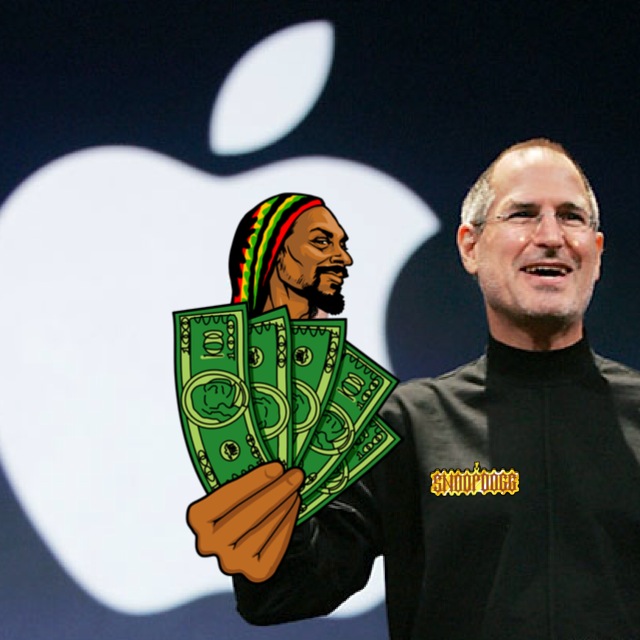