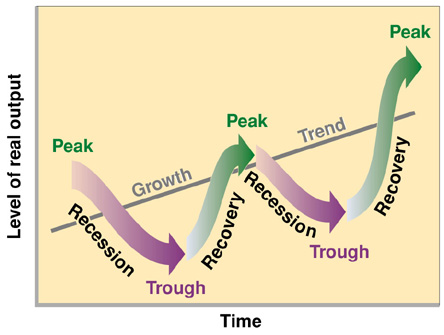 When I was a kid, tagging along with my parents to the social events they went to, I remember that all the dads used to sit around and eventually talk about the economy. This was before the Clinton campaign in 1992, when “It’s the economy, stupid!” became a national catchphrase. My dad and these guys would do this every single time. It was maddening. Occasionally someone would mention sports, but that’s it — it’s all economics. Now, funny enough, decades later, here I sit as a new dad, and after going to graduate school for economics, and now working both for startups and venture capital, boy — there is a lot of talk of economics related to startups and the Valley.

However, it finally occurred to me why there’s so much discussion about economics around here today — fundamentally, it’s driven by a philosophical divide between two groups: Those that believe the current state of consumer and enterprise technologies is structural (a “new normal”) change and here to say, versus those that believe we are in a cycle, that this is a long high tide of the market and things will whip back to normal, eventually. Of course, no one knows what the future will bring, which is why people make their bets, or try to analyze trends, or start hedge funds.

This is important for founders to understand when talking to external partners and existing and potential investors. One’s view of the economy can impact a perceived valuation. The cost of starting up has fallen, there is talent moving into the industry, and many of the jobs the country has lost won’t come back. If just one party who believes we are in a structural change begins to draw interest into your company, he/she may be willing to pay a higher price and offer you less dilution or more capital. That can be a great thing, or it can be too indigestible. Ultimately, structuralists believe the recovery is self-sustaining and lays the foundation for a new economy.

On the other hand, for parties who believe this is cyclical, they may view an investment opportunity with more suspicion or caution. There were many smart investors out there in 2012 who could sling checks but didn’t — now they have again. These people remember the bubble of 2000 and believe the economy is being artificially propped up right now because of the Fed’s quantitative easing. They also believe the banks again have too much market power after being bailed out and recapitalized (with our tax money) by the government for being “too big to fail.” They believe there are no growth areas outside of assets — which is driving money back into the technology sector (or why you see people leaving Goldman Sachs to start small micro VC funds) and bringing back turnover in the housing market. Despite the stock market, there’s high unemployment, interest rates can’t go lower (artificially boosting confidence), median income is down (most of whom are underwater), and combined with an increase in asset prices, many economists would call this pre-bubble conditions.

I don’t mean to write this to be sabre-rattling (I’m more a structuralist here), but I certainly understand the underlying economic arguments given by the cyclicals. Many people are making big bets (or abstaining) based on their view of this, and it will be fascinating to see what shakes out over the next 3-5 years.