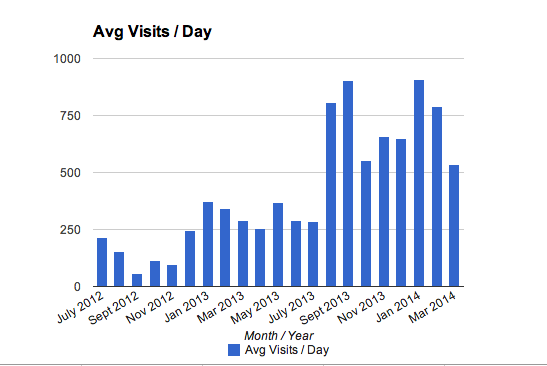 For some reason, people approach me about something I’ve written — recently or in the past — and often assume whatever I write is “widely-read.” They assume what I write here is influential, by some measure. I respond by dispelling these beliefs. Usually, the other person doesn’t believe me, but it’s happened so often recently, I wanted to look at the data and see for myself. And, it’s true…not even 1,000 people, on average, visit my site (and about 450 subscribe via email). That’s kind of pathetic when one considers how many tens of thousands of people visit Hacker News or AVC on a daily basis. (I also write a weekly column on TechCrunch, every Sunday morning. Usually those don’t generate much traffic, either.)

Look at the chart above. I redesigned my blog to start on July 1, 2012. A few things are apparent. One, traffic is pretty low! Two, the first spikes are only the result of a very famous investor who linked to one of my posts and it went viral on his recommendation. Three, what I write isn’t evergreen stuff — it may be relevant for a day or two, and then decreases in value — some of it may not have value to begin with. For the amount of time I do put into it, the ROI is pretty bad.

That’s OK though. Despite what others may perceive, I have never written blog posts here “to build an audience.” I write because I have to, because if I don’t, my brain will go into a frenzy and eventually rot. And, when I write, I try to think of just one person who’d want to read it. That’s all that matters to me. A friend told me this was “narrowcasting” — kind of like broadcasting, but to an extremely narrow segment. I’m cool with that. In fact, I prefer it. Thanks for reading!