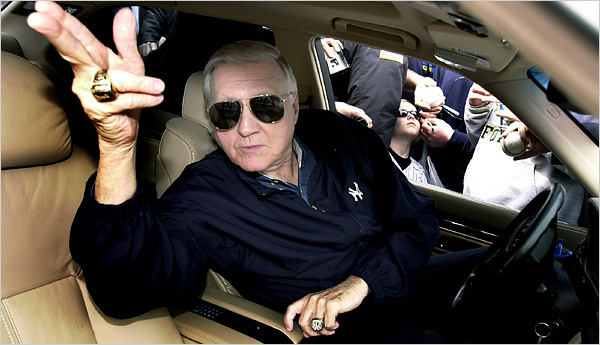 A few years ago, I was chatting with a friend who also worked at a startup. A mutual friend of ours (and one of his colleagues) got into a bit of hot water because of a bonehead move, and then he was getting skewered by the press. I remember writing in Google Chat, “We all play for the Yankees.” His response: “Yep.”

“We all play for the Yankees.” Despite the fact that most people hate the Yankees (a different topic entirely), there is an unwritten code of conduct that players on the Yankees are expected to abide by. A high-profile example is Derek Jeter, who as Team Captain is expected to keep a low-profile off the field and not show up in the news.

Why does this matter now? It matters because there’s more and more transparency in technology and driven by the Internet in general. Recently, the incoming president of a technology company was deemed not fit to lead his troops, tracing back to a $1,000 donation he made back in 2008. Even more recently, the billionaire owner of a sports franchise in a major city was banned for life from his sport and will be forced to sell his company (allegedly) in response to unsavory remarks he made in private that were recorded and made public.

I would never condone such behavior, personally. But, now this means that people in positions of power who are not nice people are at real risk of being exposed and losing their stature. If the offending behavior exuded by someone who is in power, there’s little to stop anyone with a mobile phone and network connection of taking a photograph and/or audio or video recording to expose unsavory behavior. And while some of this kind of evidence may not be legally admissible in a court of law, different communities like the NBA or Mozilla, or even your company, may have a different code of conduct. There’s the law, which applies to everyone, and there are unwritten rules, quietly enforced by the Yankees.

Moving forward, everyone in tech and in positions of power across the world now “plays for the Yankees.” We all represent our colleagues and our partners. What one of us does in the public sphere can affect those we are associated with, and while all of it may be legal and/or generally permissible, they could be subject to different, unwritten code of conduct rules. Even more so, unsavory thoughts uttered in private have now shown to have the power to cause the entire community to outcast one of its own. Again, I don’t condone any of the recent behavior that’s made news headlines, but the overall atmosphere and its effects have been on my mind.

With computers in our hands, apps that record media, and networks that help transmit media to others, anyone with a phone and agenda has the power to expose wrongdoing or settle a score against another. And if what is exposed is egregious enough, the court of public opinion and the social media mob (led by Twitter, it seems) will coalesce to make sure those things get corrected. The net result will likely be good for society and people will now be forced to think about what they say and how they behave, but the path in getting there could be very bumpy now the formula has shown to be effective. That’s why I keep reminding myself, “We all play for the Yankees.”