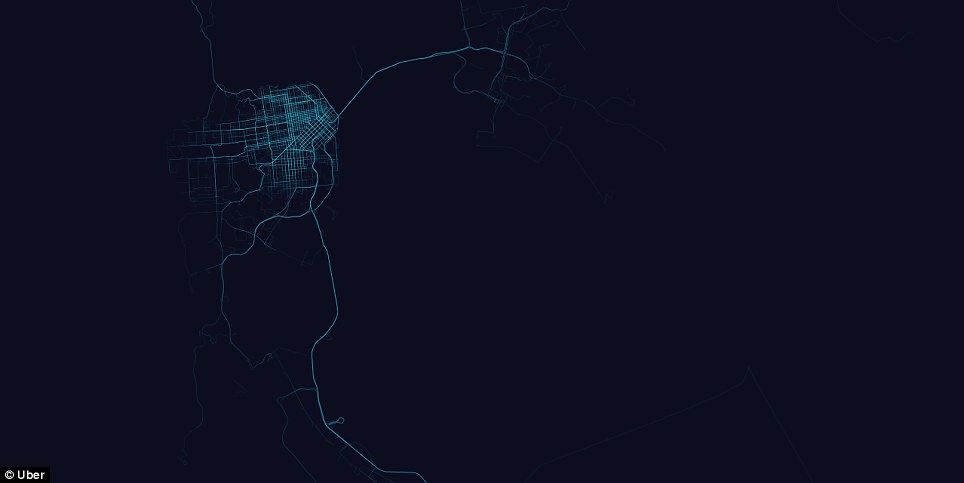 You can now hail an Uber from right inside the Google Maps mobile app, presumably on iOS and Android. This is a big deal with respect to mobile apps, app integration, and app distribution, and both acquisition and retention in mobile apps — for many reasons, which I’ll try to briefly outline below. (The picture above is a map from Uber about activity in the SF Bay Area.)

The Google Ventures Extension: Last fall, Google pumped over $250M into Uber and now owns a sizeable chunk of the company, but they certainly don’t have control of the company. That kind of investment fosters the type of relationship which can help each company integrate with the other over time, and adding Uber as an option inside Maps on iOS and Android (where many people originate search on mobile, see below). Google could one day also add Uber inside Google Now (see below). Furthermore, after the Facebook-Moves acquisition a few weeks ago and today about “comingling” of data, Uber data, especially if triggered inside Google Maps, will likely be shared among companies. Google leverages its cash in many creative ways, and investing out of GV into the app ecosystem (where they own one of the two dominant platforms) and where transportation is a frontier for consumer attention makes for a killer strategy for the company.

Mobile Intent-Based Map Search: Not often discussed, but something we are all aware of – many people search for places directly within the Maps mobile apps, as results are rendered in a more consumable format. Technically, if a user had Google Maps and Chrome or the Google App on their phone, Google could deep link them and kick the user out to Maps at the right point. Anyway, the point is that now Google will layer more data and navigation options on top of its maps, such as traffic (Waze), places to go (Zagat), and now a new transportation option for navigation (Uber).

A Taste of “Google Now” App Integrations: Google Now is the company’s killer app, an anticipatory computing service that seeks to leverage all of Google’s massive data about the world, the web, and ourselves into personalized, contextual recommendations about what we should be doing at any given time. Eventually, we should expect to see Uber as an option when Google Now presents a card for our next meeting across town. At Swell, we’d selfishly like to see them suggest to turn on Swell Radio when someone is about to take a commute. All of this is coming, it’s just a matter of time.

Risks To Uber’s Consumer Brand And Bond: As I was typing this, Keith Rabois pointed out that there is a longer-term risk to Uber for doing this, explaining that Uber has trained customers to open their app for a car, and doing this inside Maps could change that behavior. (It’s worth opening up Keith’s tweet and reading the conversation, as well.) That could be damaging or confusing, assuming that Uber has grander ambitions about offering other on-demand services under the Uber mobile umbrella. Or, it could be that being inside Maps on iOS and Android is a way for Uber to get new users (and grow) while also (re)engaging existing users.