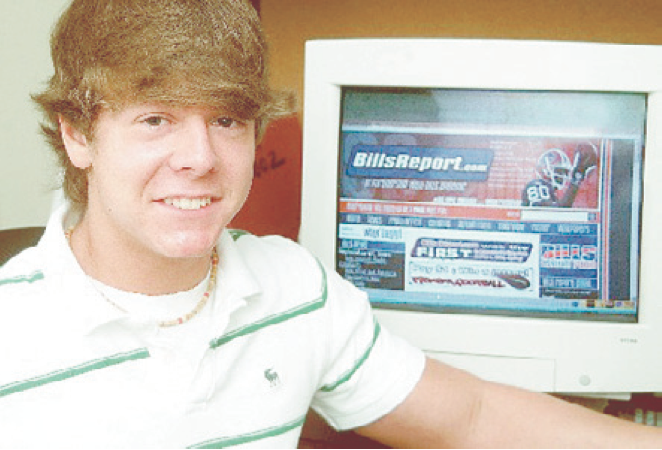 Back in 2014, Pascal, another early-stage SF investor who invests in companies at the intersection of local and mobile, introduced me to a kid from Mississippi who is now in the Bay Area starting his company. I searched my email and it turned out Jacob from Exitround (a portfolio company) also tried to make this connection a long time ago, but for whatever reason, we never synched up. The kid’s name: Keith. His company: podcasting.

I get so many pitches around podcasting. It’s hard because it’s just not an area I want to invest in, so I figured some polite way to not engage further. But, then, something interesting happened — I asked Keith about how he started on this, and his answer begin with something to the effect of: “I’ve been doing this since I was 12 years old…”

Oh, really? I rarely hear that, so I listened more (see the pic here, from 1999). Turns out Keith is a huge, huge mega-fan of the Buffalo Bills, so huge that he started building and managing fan sites for the team back when he was 12, living in Mississippi. Since then, Keith went to school, was a producer with Sirius Radio, and during that time, had a novel idea for a product: An app which played fan-oriented podcasts for college sports teams.

To get his idea going, Keith and his team figured out something clever: In many cities where college football was big, VSporto discovered, vetted, and created a monetary incentive for superfans of the local college teams to create a podcast around the team. VSporto aggregates these, pays out CPMs, and builds micro-apps for mobile devices that just focus on a particular school. In this on-demand economy, people are changing jobs and careers quickly. For VSporto, they’ve noticed that people quit their basic day jobs to pursue their interests and talents for podcasting and creating media around the subject they love.

Say you went to Florida State University — VSporto would have ~15 podcasters (or more) who create content, and the app broadcasts those streams through the week leading up to the game. Additionally, one might think the football season lasts a few weeks, but in many of these towns, it’s a full-time job just being a fan.

Check out Vsporto here. To date, they have ten (10) team apps and engagement time for MAUs could be from 47-93 minutes. The average listener goes through two podcasts per day, and nearly 1 out of 5 users will also download the app of the opponent their team is playing; many of their apps have been ranked quite high in the Sports category, which is notable for such a seemingly niche app. The engagement is so deep that the team visited a specific college campus for a football game and hosted a viewing party: Over 200 people showed up. As VSporto commissions content, the company also holds the licensing rights to the media, such as being able to license the content out to various radio stations.

This startup broke a lot of rules for me. I don’t want to invest in podcasting, but they figured out a medium not many others would stick with; and I don’t like to invest often in pure mobile apps because the distribution is choked. When I heard this, I sort of took the meeting as a courtesy, but a few minutes, that’s when it hit me that this is exactly why I don’t like to answer those “What are you looking for?” questions often posed to investors. If I knew what to expect, I would go and try to build it. In this case, I had to have enough patterns around podcasting and Apple’s iOS to make a decision about whether to get involved. I would have never thought of combining commissioned content with an array of scattered apps that all meet on the backend.

It’s early days for VSporto, but I never worry about Keith and the team. They are the only team I know who would have the passion to pursue this idea of building and stitching together niche markets. It is my privilege to support them, to have introduced them to other investors, and to have opened their round on AngelList. In terms of relaying a story about a founder and an a unique approach, it’s probably one of my favorite stories to show and tell.