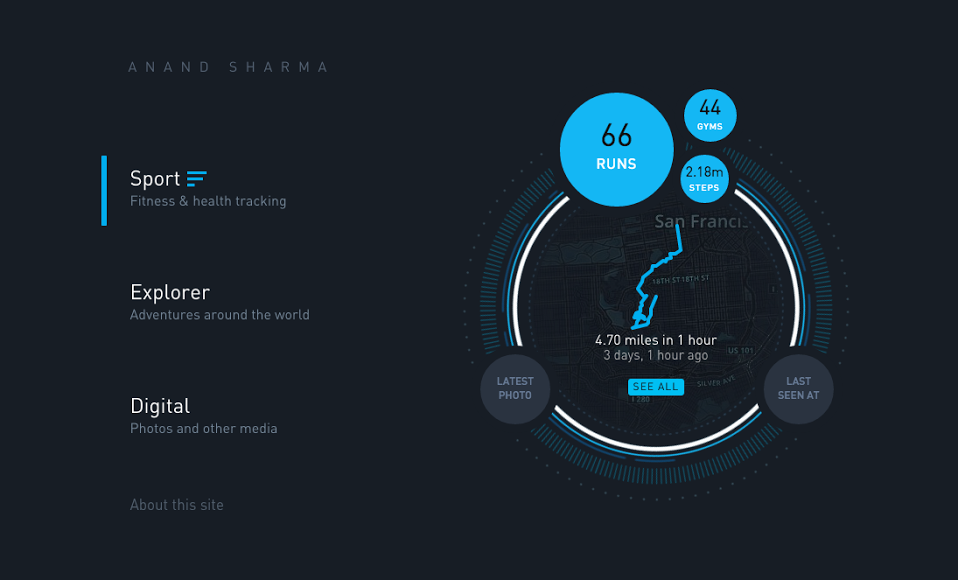 In the middle of 2014, one of my friends on Twitter (@Stammy) kept retweeting an account into my feed, usually with a screenshot. Turns out, it was his friend and roommate, and that friend and roommate had created software which just looked different than other products.

I conducted a bit of Internet sleuthing and discovered my friend’s roommate used to work for a company I was dying to invest in earlier but couldn’t convince them. That company creates great web and mobile products, too, so my interest piqued. I asked my friend for an intro, and after a few months, it came through. I rushed to meet the entrepreneur a few days later.

Turns out, my timing was good.

Anand had built the v1 of Gyroscope, currently web-based software which served as a hub for all of a person’s connected device and monitoring/tracking data. By connecting various accounts to your Gyroscope, the products gives you a kaleidoscopic view of where you’ve been, the pictures from those places, how many steps or calories you’ve collected and more. But more than just aggregating data, there’s something about the product, the design and animation, which makes it compelling.

I wasn’t sure where Anand was in his thinking. I wasn’t sure if he wanted to join a company, or still travel. We talked broadly about his options and I didn’t share any of my own views on what he should do, except that if he thought about it and wanted to start a company, I would be his first check and help him close the round.

A few days passed and he got back in touch. He was ready to start. I didn’t expect that, but was psyched about it, no doubt. We put our minds together, came up with a plan, started engaging lawyers, and all those details — we priced the round, I wired my funds, and started making introductions for Anand. We also opened up a small AngelList Syndicate, which has been closed for a while. At the end of it all, a larger fund also came in to give Anand and Eric a good solid cushion to build out v2 of the product.

As 2015 unfolds, the landscape has changed. Apple has committed some of its attention with Apple Watch to digital tracking, fitness, and health sensors. We are accumulating more connected devices which collect more and more data about us or our surroundings. What will do with all of it? Who owns that data? These are big questions, and while I don’t know the answers, I have a good feeling Gyroscope will be in that conversation.