I woke up on Friday ready for a day of back-to-back to meetings. Scanning my email, a few reporters had sent short emails asking about some embargo related to Chariot. I texted Ali, the CEO of Chariot, with a casual “Hey man, what the…?”

Then around 10am, my iPhone started to buzz. As with any type of acquisition of a consumer product or service — and especially one in the transportation space, which is red-hot this year — the news that Ford Motors had purchased Chariot (via it’s Ford Mobility Solutions arm [official Ford press release]) was of keen interest to folks in the echo chamber and beyond, as evidenced by the fact it was widely covered by The Wall Street Journal, The Verge, CNBC, Recode, Business Insider, WIRED, and more.

Investing in Chariot was a different sort of move for me, and it ended up being a different type of investment. Initially, I thought Chariot was a joke — as in, it couldn’t be real. Then, I received a very nice email from Ali, the founder, and poked around a bit more (see below). We agreed to meet. Over the course of a few months, we met a number of times. We didn’t have any mutual friends. I had to check his references. I even had to call his lawyer to verify his company’s bank account, records, and other items. Everything checked out. 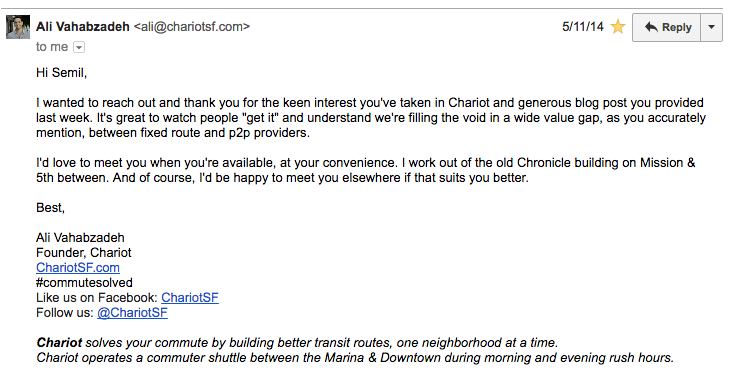 I still didn’t invest because it was so early. In that time, Ali and I became friends (spring and summer of 2014), and eventually I told him that I’d like to invest a little but mainly introduce him to everyone I know. At that point, Ali had raised some money from friends and family, had gone through the local Tumml accelerator, but couldn’t get past that milestone. Notably, Ali put down nearly $100,000 of his own money to lease the initial vans to get the service going. It may not sound like a lot given all the money floating around the Bay Area, but when you hear a pitch from Ali, you could feel that cash commitment was more than just a pound of flesh.

Chariot careened onward over the years, getting to the point where so many consumers would use it frequently (it had incredible retention rates), riders would spend over half a million dollars per month just along a few routes in San Francisco. It turns out that lots of people just want to get to work and back home without hassle, and they’re willing to pay a bit more than Muni for that comfort, but a bit less than UberX. Chariot added some interesting twists to its expansion model, most notably that it would encourage commuters to organize themselves and crowdsource their demand for new routes and “tilt” a new line. Along the way, Chariot outlasted nearly all of the other well-funded competitors in the space, and while we all know it’s hard to raise funding, imagine for a moment pitching Chariot during a time when Uber is surging worldwide and in your backyard. That is another level for degrees of difficulty.

I finally got to talk to Ali late last night, the day of the news of the acquisition. He told me the whole story of how it unfolded, and how he drove it to a close. It’s not my story to tell (more on that soon), and those details are a bit beyond the point. What’s most important to me — and when I’m writing this now, I don’t even know the size of the outcome [1] — is that working with Ali never felt like work — we were and we are friends. Work has evolved to a point that in some special cases, you are just hanging out with and helping your friends. As Ali was building up Chariot, he would periodically reach out to me, to ask me how I was doing, how building up Haystack was going. He even went so far as to ping all of his old banker friends and big families in New York City (where he’s from) on my behalf. Ali has called me countless times expressing his deep frustrations with some aspect of his quest to give birth to and nurture Chariot, and we have had our share of difficult conversations. There was a time where we didn’t really talk for a quarter or so, but we always remained friends. That made it even nicer to chat with him last night and hear the details — I could hear in voice that he was both excited and relieved, that a part of the race was over and he could energize for the next challenge ahead with Ford, which frankly sounds like an incredible opportunity for him and his team [2].

Some of the “exit” blogs from the investor-side can veer over into analysis — I could’ve have written how Ford is perhaps transforming from an automobile manufacturer to a transportation company. Or, some of them veer into the realm of how much work the investor did to help build the company — I did the syndication stuff, the YC stuff, etc. and I helped close some candidates, but to me, the real story is that Ali and I became friends through the process, and that’s what I’ll remember when I look for the next investment to make.

[1] I received over 50 emails and texts yesterday from friends. All asked about the price, too. I have no idea! I wish I did, believe me. Ali is a vault. What I learned from this process is sometimes even larger firms don’t know the final price of a deal until the wires hit.

[2] Ali wanted me to mention that he is continuing with Chariot, full steam ahead, now with more resources at his disposal, and he is aggressively hiring: www.chariot.com/careers