Talk to any Bay Area VC in the last 24 hours, and the talk of the town among investors is universal: “What do you think of the SV Angel news?” Depending on your point of view, it is the perfect trigger for a conversation about the state of the Bay Area’s investment market. Let me be perfectly clear — I do not know anything about SV Angel’s inner workings, and in all of my own interactions with Kevin, Topher, Brian, and @pm (when he was there), SV Angel was extremely helpful and friendly as many people have attested to on social media. (I have never met Ron but hope to one day.)

From afar, in today’s environment of 500+ seed funds, SV Angel is held up as one of the canonical examples for its success at getting into superstar breakout companies (from Google all the way to Coinbase) and for its dogged pursuit of helping their founders. Perhaps because of this success and the unique elbow grease they supply to their portfolio, it was shocking to many to see that one of the storied seed franchises would contract, become its own sole LP, and scale back its operations.

Yet for many, it didn’t come as a surprise. A well-networked LP recently remarked to me they’ve estimated over 150+ of the 500+ known seed funds are currently “in market” right now. I recently was given permission by Grove Street Advisors, a well-known LP, to share this graph they produced using their own data along with Pitchbook data. I have been sharing this graph with friends over the last two weeks, and they all feel it. Against a backdrop of more and more seed deals being done, the most-established VC funds who specialize in Series A and B fundings are remaining relatively consistent in the annual deal counts. Check out this graph and see for yourself: 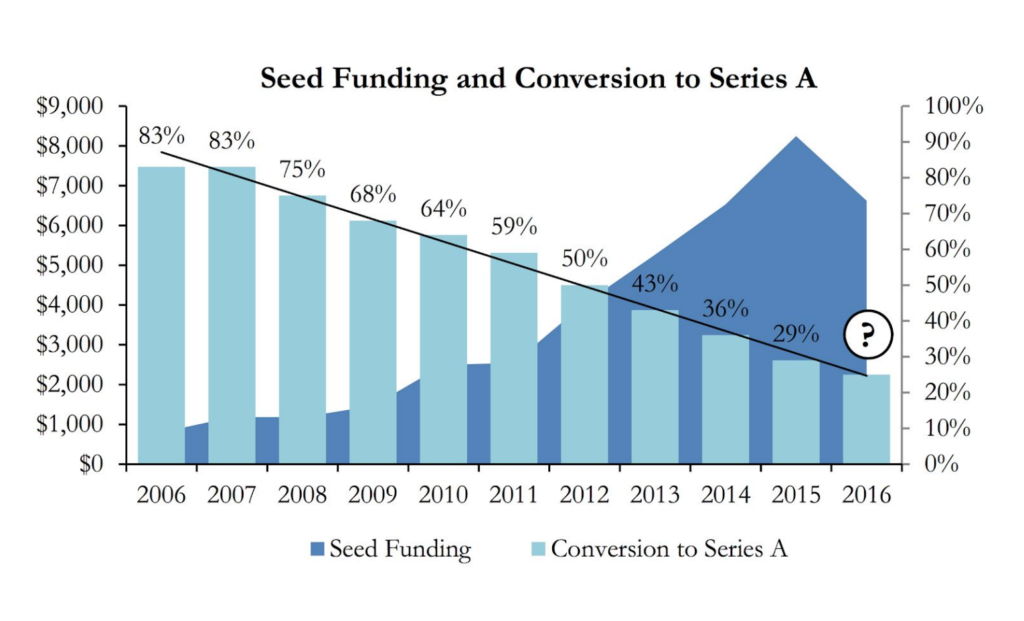 Yikes! Now, let’s step back and consider what 2018 has produced, and we’re not even halfway through the year — Many of the very best institutional VC brands have gone global and bulked up (sure, not every one of them, but many of them), and many of those funds are in the middle of a long-range generational transfer. Some established VC brands are rumored to be cutting back their LPs a bit to keep money in-house. Traditional venture is being squeezed a bit by the likes of Y Combinator from beneath and feeling The Softbank Effect from the top. NEA, one of the most-storied VC oceanliners on Sand Hill is reportedly having a partner in their fund create a new fund to buy secondary positions to get old LPs liquidity. Sequoia is rumored to be raising one of its largest-ever global funds — and recently one of its rising-star partners Matt Huang is reported to be starting a new crypto fund while Chris Dixon of a16z is rumored to creating a new crypto fund alongside a16z. I highlight Huang and Dixon not as any VC, but as two of the best investors in their respective cohorts and their shifts in focus are interesting signals to parse.

This week, Micah Rosenbloom from Founder Collective tweeted, “[T]he venture ecosystem has entered a full on mid-life crisis – feels like VCs are re-evaluating their love of the game, the way they play, the team they’re on and whether it will exist in this form going forward[.]”

I do not have any great answers here. At the start of 2018, I did not expect so much activity across the VC industry. There is a tremendous amount of money and new deals and financings. There are really amazing companies out there, no doubt. Companies are going public, and I expect many more to come in 2019-2020. As for the first half of 2018 so far, do not know what it all means — but I do know there have been lots of unexpected movements up, down, and across venture. Micah’s tweet captured the current moment quite well, I think.