Many of the most storied brands in venture capital made their name by being the investor of record in a specific company’s “Series A” round — largely thought of as the round after friends, after family, and more recently, after seed, where the new investor would lead the round, set terms, join the board, reserve capital, and make a long-term commitment to the company. However, as technology has proliferated throughout society at large and into new areas of the economy, the rate of startup formation has increased, and more funds (often at seed) have sprung up to meet this demand — and as a result, many of the most successful VC brands have scaled up to larger funds (Benchmark and USV, notably, have not) to get more “bites at the apple” in case a mega-company like the next Facebook or Uber breaks out.

The expansion of the venture capital industry (as explained brilliantly by Eric Feng recently here) has created space for a new breed of Series A investor, most of whom arrived at this point by slowly scaling up from smaller, more modest seed funds. Below is a brief graphic showing some of those fund names, their vintages (not fully complete), who the key GPs are (not a full list, I apologize), and some signature companies they’re associated with. The list is also likely not complete (I’m not trying to create a comprehensive list), but ones I’d specifically cite in the Bay Area include Aspect, Defy, Bullpen, Felicis, Slow, Amplified, ENIAC, and Craft (list below). Many of these funds will say they still do seed — and they do — but they also have more capacity to pre-empt and lead rounds at the A-level if and when the opportunity arises.

As with any new change in the landscape, there are both opportunities and challenges.

The opportunities for these new funds are endless. They can build a brand with the next generation of entrepreneurs as the pure “seed & Series A” funds; they can gobble up more ownership on the cap table by doing a mix of pre-seed, full seed, and small or larger As; they can benefit from the changes in the industry over the last decade and (hopefully) not repeat old mistakes, as so much more knowledge about how VC works is available for free online; and instead of picking companies by precise rifle shot, they can build and manage their own funnels from very early checks and “drip” capital into portfolio companies that are working with the huge, added benefit of having more time to evaluate the team before making that larger commitment. The largest benefit, of course, is that most have kept their fund sizes relatively small, so should they find 2-3 big winners and maintain ownership, their LPs and GPs will profit.

Their future is bright, but also not without its own challenges. In order to play the Series A game, take a board seat, and credibly lead those rounds from Series A to Series B, these new firms will have to build a strong roster of GPs who are qualified to sit on these boards — this would have to be done in a time when many of the very top tier VC brands are struggling to recruit the types of folks they would like to have (a subject for another post); these new funds will also have to fight for and maintain their ownership (could be double what they’re used to) in a market that’s seeing more and more aggressive private capital coming in earlier and earlier (include more pay-to-play games); they’ll be on the hook for corporate governance in a way that isn’t really required at seed; they’re founders and other VCs may expect them to provide life-cycle financial support as private market timeline continue to elongate; and exposing their portfolio to signaling risk if they don’t come into the Series A.

Time will tell how this shakes out. The larger firms have gotten much bigger and taken on multi-strategy techniques, but they’re also very experienced in managing funds across many vintages. At the same time, this new breed of the “New Series A” funds didn’t get here by accident, either – some have already been part of bigger funds, and some have slowly risen from humble seed beginnings. I’m excited to see the next decade of seed and Series A unfold and revisit this post to see how things actually shook out. 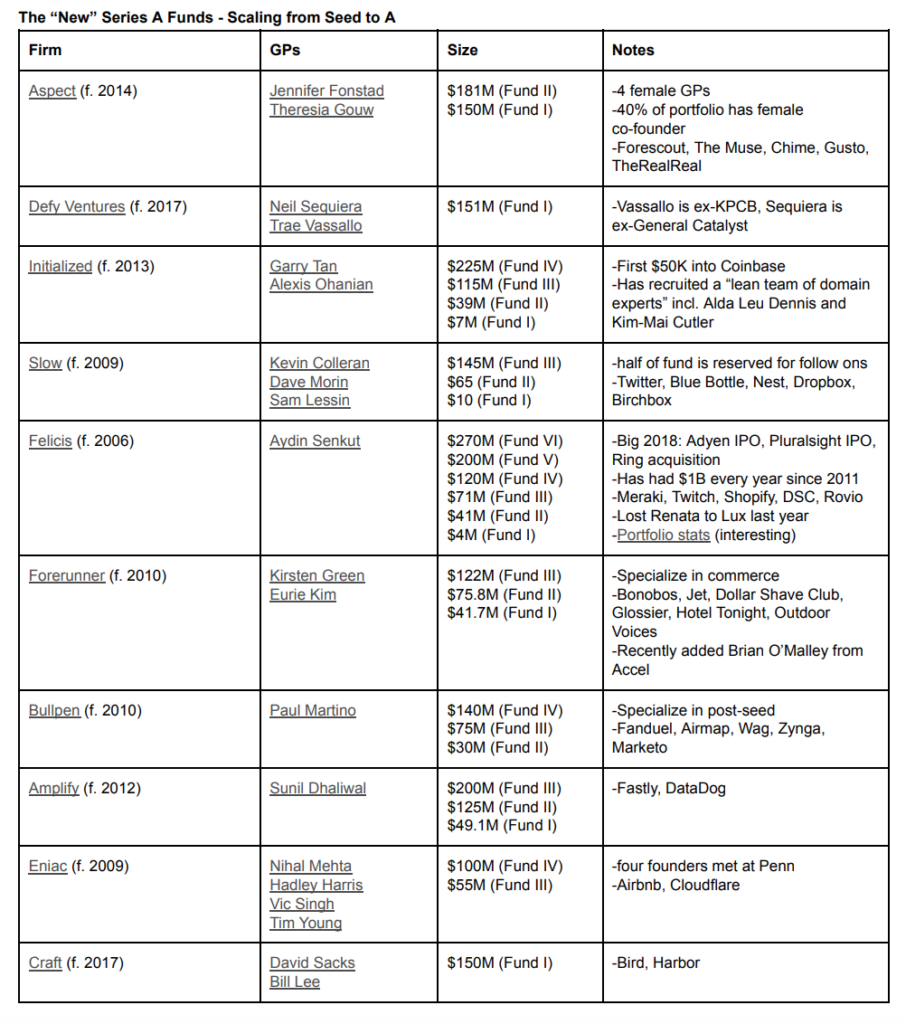