Hello. It has been a while since I’ve posted here, nearly 3 months. My fingers are well-rested, but my writing prowess is likely rusty, so please forgive any rustiness in this post. I do plan to write a lot more this summer, so stay tuned. In March and April this year, I was on the road a lot — all fun and productive work trips, but also distracting; if the past two months were about being out there and extroverted, I feel a huge wave of introversion coming as the summer comes into focus. I’ve also been working on a project that I cannot yet discuss publicly, but that will be over soon, and we can resume regularly scheduled programming on this site.

Today, I am excited to share some data on the Haystack portfolio as it relates to geography. Over the past year, and especially over the last few days, the Bay Area tech Twitter echo chamber has been tweeting about the advent of remote, or distributed, or satellite teams for their companies across the country and the world. Of course, none of this is new nor should be a surprise — the world is undergoing a massive shift from the industrial age to the information age; technology is spreading horizontally across geographies and into new sectors (and creating new markets), but also seeping deep into industries; the cost of capital is showing no signs of increasing, fueling this incredibly elongated bull run; the spread of Shark Tank culture persists, where tech startups are the cool thing to build or invest in; and the expansion of tech incumbents in the Bay Area, as well as this startup boom, has triggered rapid local inflation, where the main input costs for startups (salaries and rent) are increasing at rate which cuts too deeply into their burn rates.

This is all happening, of course, to a region that doesn’t have a modern public transportation system.

As an investor in startups, there is considerable conventional wisdom around the idea of investing only in the Bay Area. Many investors will not admit it publicly, but they either won’t invest outside the Bay Area (and these investors are successful, mind you) because they feel most big outcomes happen here or because their style of company building engagement requires more frequent interaction. “Get a plane!” chants will come from the Twitter Peanut Gallery, and many VCs do — there are outcomes like Duo in Michigan, Qualtrics in Utah, or Atlassian in Australia.

For me, as a seed investor, I started to feel this struggle back in 2015. Until then, the overwhelming majority of Haystack investments were in the Bay Area. And then, after a few years, I started to wonder — with all these new startups forming while all these huge growth rounds were happening, how would a founder even be able to recruit after raising a couple of million bucks? Everyone they’d want to hire here either could make a fortune at Facebook, or need a bigger salary as their rents skyrocketed. I didn’t want to fund founders who would then need to transform into professional recruiters — I wanted to find early teams that were already sort-of built up already — and it just so happened I started to find more of them HQ’d outside of the Bay Area. So, Haystack slowly began backing those teams, as well.

In the six years Haystack has been around, here is a rough map of where our investments have been located. You will see we made a lot of seed investments — yes, that was a part of the strategy. You will see the majority are in the Bay Area, and then New York City, and a bit more around LA and Seattle — and things get really scattered. We have been fortunate to have backed many of these of these companies “out of market” that have gone on to raise impressive Series A financings; many of the founders of these companies are in the Bay Area on a monthly or bi-monthly basis, so I see them often in person anyway; and they can take their funding and stretch out their runway, without worrying about their team getting poached every evening at a startup event. The big question still remains to be seen – will this investment activity pay off in terms of returns. I hope so. But, perhaps its as simple as the following — today with Zoom, Slack, and other modern communication tools, it may help certain founders to build in the early-stages outside the Bay Area — where teams can form and bond, where the runway can last a bit longer, and where the team can be insulated from the noise of 2019 San Francisco. 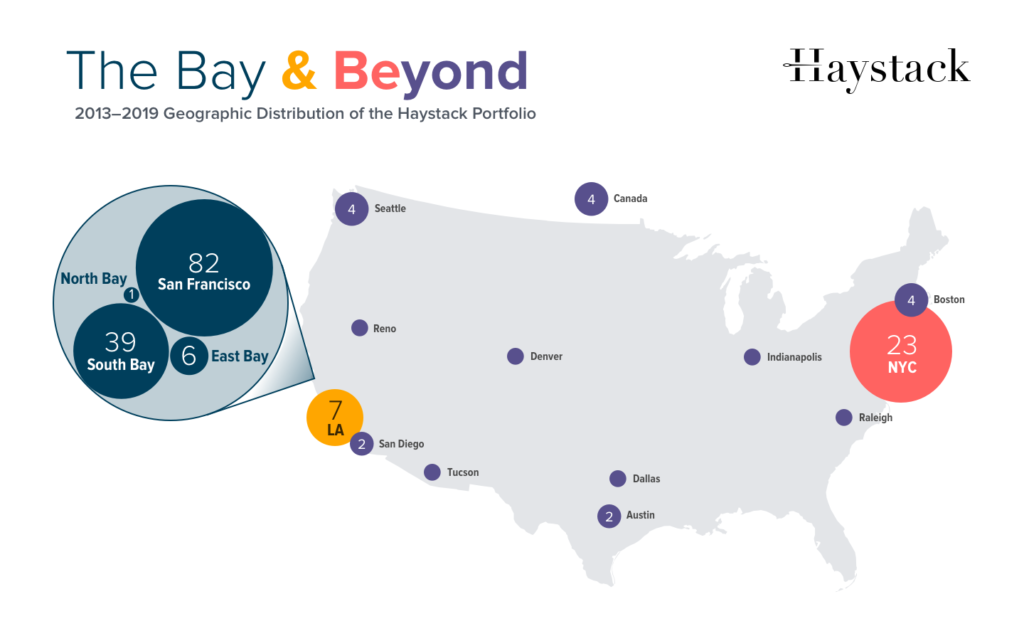